Seriously I don’t think I’d ever been as cold as I was yesterday in Koln/Cologne.

For the first time in my life I wanted to own a real fur coat, a real fur hat and fur lined gloves! All very Russian in style for a girl from the valleys. Having experienced the biting raw wind I fully appreciate why these garments are worn, without protest.

My host was keen for me to visit the Christmas markets in Cologne… hmmm, now how do I put this politely- let me see?

At the foot of the Dom, a brash rash of decorated sheds crammed full of ‘tat’ draws in the tourist by the bus load! Like lemmings careening over a cliff they buy gifts from the noisy bright gaudy arena that had little to offer or attract me, except perhaps as a people watching exercise.

Well dressed and warmly wrapped up against the cold, people stood around drinking gluwien and beer. There was no produce from local artisans, just items that were probably mass produced in China. I was reliably informed local artisans would not be able to keep up with demand; however I wondered if they had been offered an opportunity.

We headed to the Dom, the cathedral, to escape the cold. It was packed, tourists herded in droves wandered around the cavernous interior of this magnificent church, which could cope with the volume. It was a sombre space, as cold as outside and the ambient lighting was dimly lit and rather gloomy.

The stained glass windows, (one of my passions) were breath-taking, even on a dull overcast afternoon. Big windows that stretched from floor to ceiling, vast expanses of very precise very modern glass, mostly replicas of the original medieval work that had to be replaced after World War II.

The glasswork was perfectly symmetrical, beautifully coloured in strong colours that were too bright and too varied to be anything other than modern and yet it worked, the windows lost none of their majesty.

A beautiful modern glass panel, in the south transept, designed Gerhard Richter hangs like a child’s brightly coloured quilt dazzling the two more ornate side panels that were larger by far. This piece of work had ‘zing’ and was magical and my favourite window.

The gold Sarcophagus is/was staggering, a mass of opulence and wealth, and a statement like none I've seen before.

And as we departed into the approaching twilight I walked into the square and saw a symbol, high up on a building across from the church- No: 4711 that bought memories flooding back of my childhood.

When I was a girl my mother had No: 4711 on her dressing table, and it is still sold in the same green and blue branding from all those years ago. I never realized until that moment the connection between Koln & Cologne! The shop is still open for business; yet it has transformed its image whilst retaining the essence from the past.

As we wended our way back to the car park my host suggested we visit another market. I can’t say I was terribly enamoured with the idea. I was cold. I was tired, yet somehow he persuaded me it would be worth it. And he was right.

This was a smaller affair, a prettier market, offering slightly more artisan products, and the star lights strung high overhead in the tree branches and the twinkling cabin lights made it feel more magical. The merry go round was brightly lit too and twirled silently. Here we stopped to eat hot crepes filled with nutella, marzipan and amaretto- I can’t begin to tell you how delish these tasted! 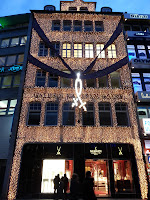 Koln is vast and well worth a visit if you get a chance. The Christmas lights that adorned many apartment stores sucked us in and the Imaginarium had the cutest entrance to a child’s store I’d ever seen.

You'll fine me here in this anthology for your Kindle

Ether Books Publish Short Stories and Essays, Including Some by Me!

Kay
I am fascinated by the extraordinary things that ordinary people do especially in their pursuit of happiness. Ultimately it’s what we all covet. How each of us achieves this, whether it’s settling for contentment or striving for ecstasy is different and family lives can provide fascinating conflicts. My short stories are based around this theme – whether it’s longing or lust, found or destroyed, versus need and desire.